1
SHARES
18
VIEWS
Share on FacebookShare on Twitter
When you buy via links on our site, we may earn an affiliate commission at no cost to you.

The owners of the pets often prefer to select their pets based upon the skin color, condition of the coat, and size. Since the guinea pig is one such creature that comes with a variety of colors, fur sizes, and even body sizes, there are plenty of options from which you can choose.

Now that can be fun as well as confusing at times when you are not sure that the brown guinea pig will be more suitable for you or the white one. Now, this pet has become a trending creature for adoption and you need to be conscious about the features and looks while selecting the right one. 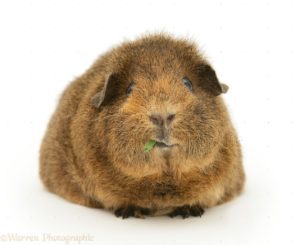 There are not one but several species of brown guinea pigs which are different in nature and requirements.

Agouti is one such species that is pretty famous among the new owners. They are easily manageable and can come in various colors.

Most of the agoutis are seen with ticked coats, that is, they have small marks on their coat all over their body. Most of them are found in a single color. The shade often looks grey or grayish brown. This type is famous but yet it is a new breed and that is why it is priced high.

Argente is another brown-shaded guinea pig with some different kinds of ticks on their coats. Their specialty is they have different shades of brown on their body. So some hairs in their body are differently colored and even some hairs are double colored. 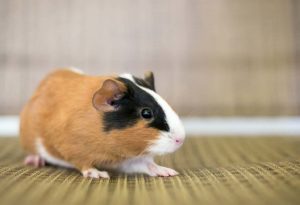 American guinea pig is the most common breed of guinea pig with brown, black and white color. They are the most friendly ones when it comes to the variety of species. They are easily manageable and when kept with other guinea pigs, they stay pretty happily. This variety of guinea pigs is good for getting along with kids too.

Merino guinea pig comes under the mixed-colored brown guinea pigs list. They look cool with their brown, white, and sometimes orange streak of furs on their coat. They are also pretty friendly in nature and even called the most intelligent among all other guinea pig breeds.

Rex guinea pig is a short furred brown or black colored guinea pig with cute button-like eyes and droopy ears. This breed is pretty friendly when it comes to interaction with human owners. They also love to be cuddled and petted.

A white-crested guinea pig is another quite attractive-looking brown guinea pig that comes with some crown-like patches on the top of its head. Thus they are named so. The crest or the crown on their thorough brown-colored body makes them look exquisite. They have shy nature but they are very intelligent. This breed should not be kept in a group; rather a single cage should be allotted for a single guinea pig only.

Abyssinian guinea pigs are much popular than American guinea pigs. This one can be available in brown, black and some other variety of colors. They are very affectionate in nature and that is what makes them a lovely choice for home adoption. They have ruffled long furs on their body which makes them look like they are just out of the bed. That adds to their cuteness for sure. You can adopt it f you can manage to take some time out for its looking after.

Sheba is yet another brown and black mixed guinea pig that comes with long furs. They look disheveled and that is why they are also called “bad hair day” Their name is pretty suitable though they have extremely good nature and temperament. They also need a good amount of care and time to be kept in proper shape. 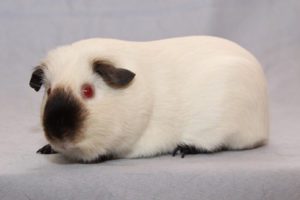 Tortoise: These are usually called tortoise and white-colored guinea pigs which are immensely popular and thus they are also easily available at a lower cost. They are very beautiful to look at; as the pristine white-colored fur-covered body makes them look unreal and often very similar to stuffed toys.

This is not a new breed and they are also much easily manageable.  There are some white guinea pigs available in complete white shade, whereas there are other ones available in mixed colors. That is, they have body parts that are black or brown while most part of their body is white.

The tortoise ones are a mix of three colors, white along with black and tan or red. Their body contains all three colors in random shapes and sizes. Most users find it pretty attractive.

Himalayan Guinea Pig: There is one more variety of white guinea pigs available and that is called Himalayan species. They have an all-white body with red eyes. The other color found in their body is brown or black which is the color of their ears and paws. As the whole body looks white, their small ears and paws make a great contrast. Also, the nose is often brown or black in this species of guinea pig.

Teddy guinea pigs are also white ones and they look so much like the popular soft toys they are named after, that the owners often seek this particular breed to keep at home.  They are mostly white in color with some spots or patches of brown on their body. They have short and dense fur that keeps their body temperature balanced. They need proper grooming due to this luxurious fur coat. They are also pretty friendly with other creatures or other guinea pigs of different breeds.

Silkie is one of the gentlest breeds of guinea pigs which is perfect when there are seniors seeking companionship by adopting guinea pigs. They have long silky hair and that gives them a majestic look. They are very much laid back in nature and that is why you need to make them exercise to keep their body weight in check.

Selfs: This is an interesting variety of guinea pigs, which is rare. The guinea pigs of this species come with a single color with smooth non-wiry coats. There are some absolutely stark colors available in this variety and that can be as strange as lilac, though we can find brown, white, cream, or black colored guinea pigs more often from this variety.

These ones are called selves as these ones do not have a single patch of different colors on their body. They are cute and often kept as pets. But they are not for commercial uses.

Fox: There is this special variety of guinea pigs called a fox. They are very similar to selves, but the only difference is that these species have a pale patch around their eyes, nose, and mouth. They are mostly found in chocolate brown shade as well as black or lilac.

If you wish to adopt a guinea pig that is cool and calm in nature then do not only check the body color but gather information about the nature and tendency of the particular breed. This information is available online but you can also ask the breeder about these features.

Also, make sure that the guinea pig you bring home has perfect health. The color of the coat changes their look but nature and health are always of maximum importance when you will adopt any creature. Provide the guinea pig with the best lifestyle and it will be your friend, be it white or brown.