Can Rabbit Bedding Be Composted?

We use the vegetable skins and many other parts of vegetables and fruits that are not used for eating. These parts are usually good as compost as these ones provide the soil with important nutrition.  This product is used as hummus and this is a must for the growth of plants of every kind.

Can rabbit bedding be used for compost?

Rabbit beddings with rabbit droppings can be used as compost. You should use items like paper, wood shavings, or straw. Rabbits are vegetarian creatures and they prefer to sometimes eat their bedding too.  When the rabbits are healthy and they poop normally, then you can use the beddings with the poop for composting.

For the meat-eating creatures, the poop is not good for compost but for the vegetarian creatures like rabbits, it would not be a difficult thing. 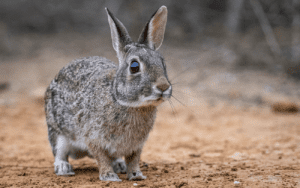 Can rabbit pee go into compost?

Yes, rabbit pee is good to go as compost. Even if your rabbit directly pees in your backyard, no need to be worried. Their pee is quite good for the plants that are there. The litter, as well as the urine of rabbits, is both good to be applied as the compost or the fertilizer. It can be safely used for gardening purposes.

Can you turn the rabbit bedding into mulch?

No, rabbit bedding is not good for the mulch. As the rabbit feces and urine contain a high amount of nitrogen it is better to be used after composting. If you directly apply the droppings to the plants then some plants may get burned and that will be rather harmful to your lovely garden.

Why rabbit bedding can be good compost?

Rabbit droppings are much good as compost because it contains all the qualities of fertilizer. It contains nitrogen and phosphorus.  Use this bedding for compost tin and you will get good fertilizer for a flourishing garden.

Rabbit poop wins the first prize when it comes to selecting the right manure coming from a vegetarian creature. Their poops are often sought by plant lovers but they do not poop as much as the big animals. When you will grow some seedlings, it would be best to put some of the rabbit bedding compost on the little plants so they get an ample amount of nitrogen from the fertilizer.

But rabbit poops need to be composted or even after composting it should be soaked for complete two days and then diluted before applying. This will be great as a diluted nitrogen fertilizer for the little saplings.

How do you preserve the rabbit bedding for composting?

The bucket where you would put the rabbit bedding along with feces and urine would be kept in sun. You should stir the bucket content once or twice a day so it gets a good amount of oxygen and it rots faster. Within the period of 3 to 5 days, the whole content will be dissolved.

However, it will not dissolve completely within this time period. But you can pour some small part of it into the soil where it would help the plants to grow. Some plant lovers manually break the lumps of the beddings so it gets absorbed in the soil faster.

Rabbit poop should be composted first along with the bedding if you want to reuse it. This is a great environmentally friendly way of using rabbit poop. But when you directly use this for the gardening then many plants would die due to the high nitrogen content of the poop. This is why it is called hot manure and the same is applied to the poop of cows, horses, chickens, and such vegetable-eating creatures.

Can you use the rabbit bedding compost in high amounts in your garden?

How can you use the rabbit bedding compost in the garden?

A bucket is needed for composting the rabbit bedding. It should be a large one, as big as a five-gallon bucket would be good for this purpose. The rabbit bedding with pellet would be sprinkled and then it can be topped with tea leaves. you have to give it a good stir and let it settle for two-three days.

Tea can be used on the top of it and then you can plant some seedlings there. You can also directly use this mixture in the garden.

Yes, worms can live on rabbit bedding compost. It can be used as manure when you leave some worms on it. The worms would work to eliminate the odor and pile in the beddings of the rabbit. The poop lumps would be broken and then the bedding would be ready as manure for the garden.

Are rats attracted to rabbit poop in the bedding?

Mice and rats are quite attracted to rabbit poops. So if you wish to leave some rabbit bedding with droppings in the open backyard make sure that it is covered or protected somehow. Rats and mice are scavengers so they can find the rabbit poop as their food. They can eat the rabbit droppings, so the compost can attract the rats when left in an open place like a garden or backyard.

Can you add hay to the rabbit bedding compost?

Can Rabbits Jump Over Fences?

Can Rabbits See In The Dark?

How To Protect Rabbits From Snakes?

Can Rabbits Drink Water From A Bowl?